18th Concert of the National Orchestra of Athens

The great and internationally famous piano soloist Dimitris Sgouros, our native son, whose progress and evolution we have followed for many years in the biggest concert halls in Greece and abroad, and whose interpretations have garnered triumphant praise from the critics, has been honoured with many prestigious international distinctions for his artistic work.  Notably, he has recorded more than 10 CD albums, featuring some of the most remarkable and difficult pieces of the piano literature.

Attending this soloist’s concert with the N.S.O. (their 18th so far) in the 2nd Piano Concerto of Franz Liszt, one was struck by the great maturity of this distinguished artist.  Sgouros is not just a virtuoso pianist in the limited sense.  Rather with him, virtuosity is a vehicle deployed for greater artistic ends, always in the service of a tremendous sensitivity and musical feeling.  The clarity and distinctiveness of his sound are remarkable.  He achieves a perfect balance of all those artistic parameters by which the greatest performers are measured.

Liszt’s 2nd Piano Concerto doesn’t follow the typical construction of such works, but is centred around six bars connected by transforming themes.  Sgouros consistently demonstrated an extraordinarily dextrous technique, particularly evident in the extremely difficult cadenza.   The finale, a musical theme in march rhythm, was brought off with a rousing flourish.

As this evening’s performance was dedicated to the 200th anniversary of the great composer’s birth, the second work in the programme was also by Liszt - the Totentanz (Dance of Death), again scored for piano and orchestra.  This is a work based on the “Gregorian chant” and it incorporates many mediaeval motifs and concepts.  Sgouros’ presentation was impressive.  The sound of his piano seemed at times to exceed the instrument’s physical capacity, and this was achieved through his mastery of myriad sound “effects”, conveyed by his fingers and a wellspring of emotional feeling.

It is perhaps pertinent to note that the Liszt compositions, like those of Chopin or indeed other great pianists who compose works for piano & orchestra, give an extra emphasis on the piano writing, versus the orchestral accompaniment, and this explains the orchestral part’s comparative lack of density.

"Little Dimitris is the eighth wonder.  I have never heard such a thing in my whole life. I do believe he is the reincarnation of Liszt. This phenomenon cannot be explained by normal standards. He reads the most difficult music like a newspaper. And the strength of his muscles! That technique that knows no obstacles... and the passion... and the subtleties... the breadth of repertoire! God help normal talents if such a comet appears. And thank God for such a comet because he gives us a glimpse of His infinity." 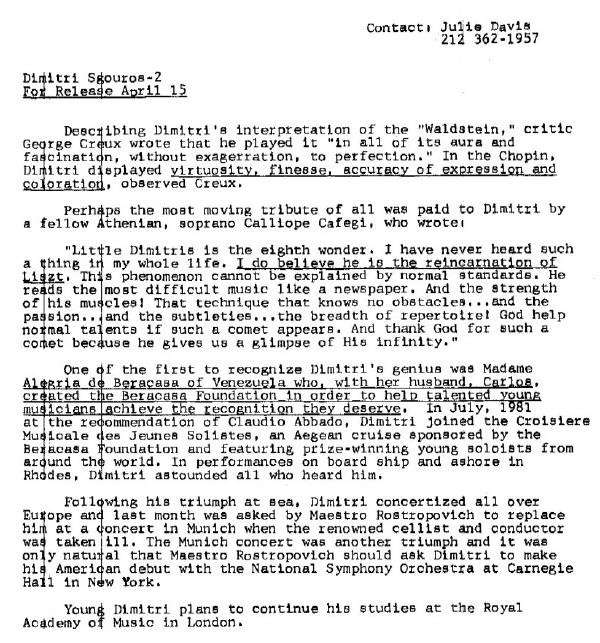