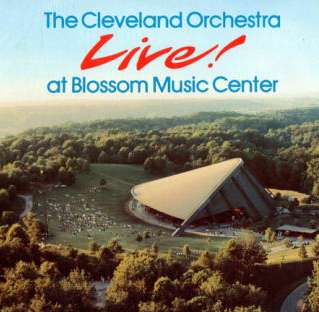 A young pianist who was not even born when Blossom Music Center opened in 1965 won the hearts of a good-sized audience there Friday night in his debut appearance with the Cleveland Orchestra.

Dimitris Sgouros, the 14-year-old Greek pianist, played Chopin and Mozart with the orchestra under guest conductor Eduardo Mata. After intermission Mata led our town band through a rousing performance of Dvorak's Symphony no.7 in D minor.

There is simply no question that young Sgouros is a genuine musical phenomenon. He has a facile technique and sound musical instincts  and what is more astonishing in someone so young, he has a real sense of musical style.

Sgouros has made a name for himself so far in his brief career in the big, finger-cracking romantic repertory, concertos like the Brahms B flat and the Rachmaninoff third. Thus the choice of Mozart (K. 466 in D minor) for this concert was both uncharacteristic and daring. Mozart is the ultimate test for any pianist: though perhaps technically simpler than the romantics in terms of merely pumping out lots of notes very fast and very loud, Mozart is so pure, so exposed and so stylistically demanding that he eludes many a pianist five times the age of Dimitris Sgouros.

In both the Mozart concerto and Chopin's "Andante Spianato and Grand Polonaise" that preceded it Friday night, Sgouros played with remarkable fluency, musicality and technical command. His performance of the unaccompanied andante introduction to the Chopin work - beautifully lyrical, steady in tempo and well articulated - was especially fine.

In both the Mozart and Chopin he did show a tendency to rush a phrase and to shape it more virtuosically whenever the music gave him the opportunity, as though he just could not wait to show his stuff.

And the Mozart concerto inevitably did show Sgouros' youth and lack of total musical maturity. He and Mata and the players gave it a strong, passionate interpretation, with tempos brisk and the concerto's obvious intimations of Beethoven emphasized through strong accents and loud dynamics. In the famous stormy middle section of the slow movement there were some balance problems, with the orchestra covering the solo part too much.

Sgouros rippled through the concerto's piano part expertly, but failed to reach all the music's emotional depths. He conceived the opening theme of the slow movement, for instance, as simply a pretty tune, without projecting much of its ravishing lyricism. And under his fingers, the finale of this dark and emotionally troubled concerto came out more delicate than demonic.

In the Mozart there was again a tendency for Sgouros to rush ahead whenever he had the musical lead. His cadenza in the third movement was a stormy and dramatic one, too  probably the seldom-heard one written by Beethoven.

There is no doubt that Dimitris Sgouros is a young man touched by extraordinary gifts. Any reservations one has about his Mozart Friday night must be taken in the light of the vast maturity and life experience needed to deal with this music on anything like its own terms. He clearly will have a major career if he is careful to husband his talent and not to waste it. I think if he comes back 15 years hence and plays Mozart, we will hear a transcendent artist. He is already well on his way to that goal, and the audience Friday night loved him.

The performance of the wonderful Dvorak symphony that ended the concert was a sheer joy - vigorous, rhythmically alive, full of drama, brilliantly played and conducted. It was a vibrant masterwork superbly rendered and it brought the evening to an exciting close.